Some questions and answers about solar generators….

Like all human endeavors, solar generator manufacturers have their full share of shysters and snake-oil salesmen, as well as well-meaning folks who just don't know what they are talking about. These folks make, or worse, imply by omitting certain details, fantastic claims that bear little correlation to the real world of physics. The truth of the matter is that no matter how many gigawatts the inverter may claim to be able to put out, one will always be limited by the battery bank capacity. That is why the battery capacity is usually given little attention, and most of the shouting is about the 50 gajillion “surge watts” capacity of the inverter. (More on “surge watts” later!)

Battery capacity is usually measured in one of two ways: For cars and trucks, it is all about the cold cranking amps, which is an indication of how much current is available to crank the starter. Total battery capacity is less important because the high current must only be supplied for a few seconds, and then the battery will be recharged by the alternator when the engine starts. Batteries in this case are almost never deeply discharged (flattened), and in fact doing so actually damages the battery to such an extent that it may be ruined in as few as two or three such discharges.
In the case of solar power systems of any size, the batteries may be required to be drawn down and recharged many hundreds of times, and this calls for a different type of battery, called a “deep-cycle” battery, (also sometimes inaccurately referred to as a “marine” battery). In this application, maximum amperage (current) available is less important than how much total energy the battery can store, and this is expressed in ampere/hours, or amp/hours, so a typical deep-cycle solar system battery may be in the range of 20 amp/hrs, for a very small one, all the way up to 2,200 amp/hrs for the really big industrial batteries. What this means is that, in theory, a 20 amp/hr battery will do just what it says; supply a current of 20 amperes for 1 hour. Simple, right? Well, actually not quite…welcome to the world of engineering, where nothing is ever quite what it seems.
What the battery manufacturers state in fine print is that the amp/hr ratings are actually spread over a 10 hour period, hence a 20 amp/hr battery would sustain a current of 2 amperes for 10 hours.
You see, batteries are plagued by a phenomenon known as internal resistance, and remember electrical engineering 101? Current (amperes) flowing through resistance yields heat. More current means more heat, more heat means more resistance, more resistance means more current must be drawn to maintain the load, and so forth in a self-destructive, escalating spiral. If one attempted to draw 20 amps of current continuously from a 20 amp/hr battery, it would be flat in much less than an hour, due to so much energy being lost as heat within the battery. It could even damage the battery!
So, you see, it doesn't do much good to put a 5000 watt inverter on a 100 amp/hr battery, as it would only run about 15 minutes, assuming the internal battery components didn't melt. Even 2500 watts of continuous load placed on a 210 amp/hr bank would drain the batteries in less than an hour. The only sensible reason to install a large inverter is to be able to start inductive loads, which brings us to the next topic: Inductive vs. resistive loads.

Inductive vs. Resistive Loads
Electrical loads, for the purposes of this article, fall into 2 categories: Inductive loads; for example, motors, such as the compressors on refrigerators, and resistive loads, such as lights and heaters. An inductive load like a refrigerator requires a huge surge of current, maybe 2000 or even 3000 watts to start the motor, but needs this much power for a very short time, usually a second or less. Once started, it then uses only a hundred watts or so to run. On the other hand, a resistive load, like a 2000 watt electric heater, would draw 2000 watts continuously as long as it ran.

Inverters, sine waves, surge watts and all that jazz…
An inverter is an electronic device that converts (usually low voltage) direct current (DC) to higher voltage alternating current (AC). The typical consumer-level inverter converts 12 volt DC current from a battery into 115-120 volt AC current at 60 Hz (cycles per second), the same as what you get from the wall sockets in your home.
It isn't necessary for the purposes of this article to delve too deeply into the mechanics of AC vs. DC, however, I do wish to briefly discuss sine-wave vs. so called modified sine-wave technology. In the diagram below, you can see an oscilloscope display of a sine-wave laid over a modified sine- waveform. 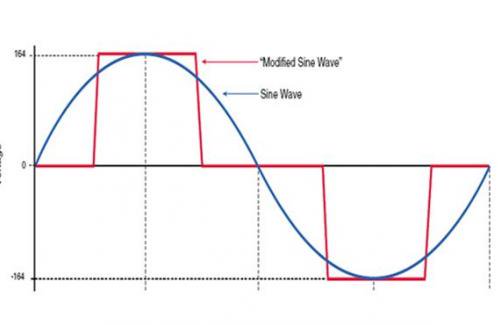 Ok, that's as clear as mud, right? What's the difference in practical applications? Simply put, a modified sine wave (MSW) inverter has much simpler control circuitry, so is therefore a lot more inexpensive to build, and is therefore priced accordingly. A true sine wave (TSW) inverter not only must have much more sophisticated control circuitry, but must also contain various components like chokes and filters to ensure a clean sine wave output, therefore a TSW inverter is quite a bit more expensive that a MSW inverter, and is also less efficient in it's conversion process, meaning more battery power is lost as heat.
Ok, you say, then why does anyone need a true sine-wave inverter? The short answer is, generally, they don't. Non-geeks will say you “need” the “clean” power of a TSW inverter for your computers and cell phones. Rubbish! Computers, cell-phones, tablets, LCD TVs and 99.5% of all other electronic gadgets merely convert the AC power from a wall socket or TSW inverter back into good old fashioned low voltage DC current to operate!
Now before we dismiss TSW inverters as useless, they most certainly are not! I use a large (read: Expensive!) true sine-wave inverter to power my home's solar power system. Why? Because some items do need true sine-wave power. Any clock that uses what is called a synchronous motor to tell time will not work properly with an MSW inverter. Also, many devices with certain types of temperature regulation circuitry, most notably, laser printers, will not work with MSW power. Some types of fluorescent lights also may hum annoyingly. (I have only ever noticed this phenomenon on the older lights. The newer ballasts and CFLs seem to be unaffected.)
So, should one pay the substantial premium (roughly twice the cost) for a TSW inverter? That is something each person must decide for themselves, based on their own needs.
One final thing that deserves mention when discussing inverters is the “surge watts” specification. To simplify, it all comes down to simple heat. An inverter rated at 2500 watts continuous power can, under most conditions, keep the components cool enough to operate under a 2500 watt load indefinitely. But because the components can actually handle a lot more power than that (until they melt!), most inverters can briefly put out roughly twice as much as their continuous rating. The key word here is briefly! The duration (on the order of a tenth to a few hundredths of a second) that the inverter can sustain this output is so short as to be functionally useless. A moderately heavy inductive load like a freezer has to have a high starting surge for a second or two, not a fraction of a second!
A good rule of thumb in the real world is that a good quality inverter will sustain about 50% more power than it's continuous rating for a meaningful amount of time (one or two seconds, at least), hence, an inverter rated for a continuous 2,500 watts will put out about 3,700 watts long enough to start a motor. Forget it's 5,000 watt “surge rating”; it's as meaningless as a politician's promise to balance the budget!